If you are like us and you grew up in the 1980’s and 1990’s you likely remember one of the most epic racing games ever on the original Nintendo Entertainment System (NES) – RC Pro-Am. We were reminiscing with our great friend and Garner, NC dentist Adam Moore about growing up with a Nintendo. He said one of his favorite games was RC Pro-Am, along with Bump ‘N Jump. As a young boy I can remember trying to collect all the letters to spell out N-I-N-T-E-N-D-O. In fact, this is how I learned to spell out Nintendo. Some interesting features of the game were as follows:

Drafting and Sliding Around the Corners – This game was the original drafting and sliding through corners racing game. While most people think of Mario Kart as the first game to do this, it was, in fact, RC Pro-Am. You couldn’t get past the first race if you didn’t know how to slide into the corners at full speed. The concern was sliding into those corners and hitting oil or water that was on the racetrack.

Oil and Water Causing Spin Outs – From the very first race, players will see water and oil on the track. When hitting these types of liquid, the car would spin out. It would not crash, but it would spin out and go much slower. It could go as slow as 40 mph after having gone 80 mph during normal speeds. Other barriers started to come into play in the later races.

Super Sticky Tires – While playing the RC Pro-Am racers are able to collect special items to improve their driving. The super sticky tires make it much easier to slide around the corners and draft into turns so you can pass anyone that may be ahead of you.

Turbo Acceleration – As with all racing games, there is a turbo acceleration option. This basically allows you to hit the turbo and get an extra boost for a second or two. Instead of going just 65 or 70 mph, you can go up to 80 or 85 mph with a turbo boost.

Higher Top Speed – Anyone that grew up on a Microsoft desktop computer back in the day can remember playing NASCAR and setting the speed of your car just a little bit faster than everyone else. As the laps went by, you could get a bigger and bigger lead. While you can’t simply set the speed higher on RC Pro-Am you can add to your skills and gain a higher top speed.

Each of the three skills of Super Sticky Tires, Turbo Acceleration and Higher Top Speed have four (4) levels to level up.

Turbo Arrows – As you start to get to the more advanced race tracks you started to see turbo arrows in which you could go from about 75 mph to 125 mph for a short burst. Often times, these turbo arrows were one after the others so if you could hit them all correctly you could easily win the race. Just don’t hit oil, water or any barriers on the track and spin out.

Shooting a Car in Front of You – Another trick in some of the later tracks is gaining the ability to “shoot” anyone that goes in front of you. When you collect this item, you can shoot little black balls out at your racing competitors. It is often best to save these shots until the end of the race because you may need them right at the end to pass someone to get first place.

Rain Clouds Moving on the Track – While there are water and oil spots from the outset, there are rain clouds that go back and forth along the track by Level 5. At this point you should have saved up some “shots” just in case you are hit with a rain cloud on the third lap. Level 5 is also when you start going for three (3) laps instead of two (2). The first four levels are just two laps.

Hitting the Blockade – By level 7 gamers will find the blockades that come up and go down in the middle of the track. These aren’t across the entire track but they will definitely cause you problems if you don’t remember where they are as there are only three (3) laps on the level 7 track. Don’t get caught behind a blockade or you will likely lose.

Collecting all the Trophies – Here is what it looks like if you win all 25 races. 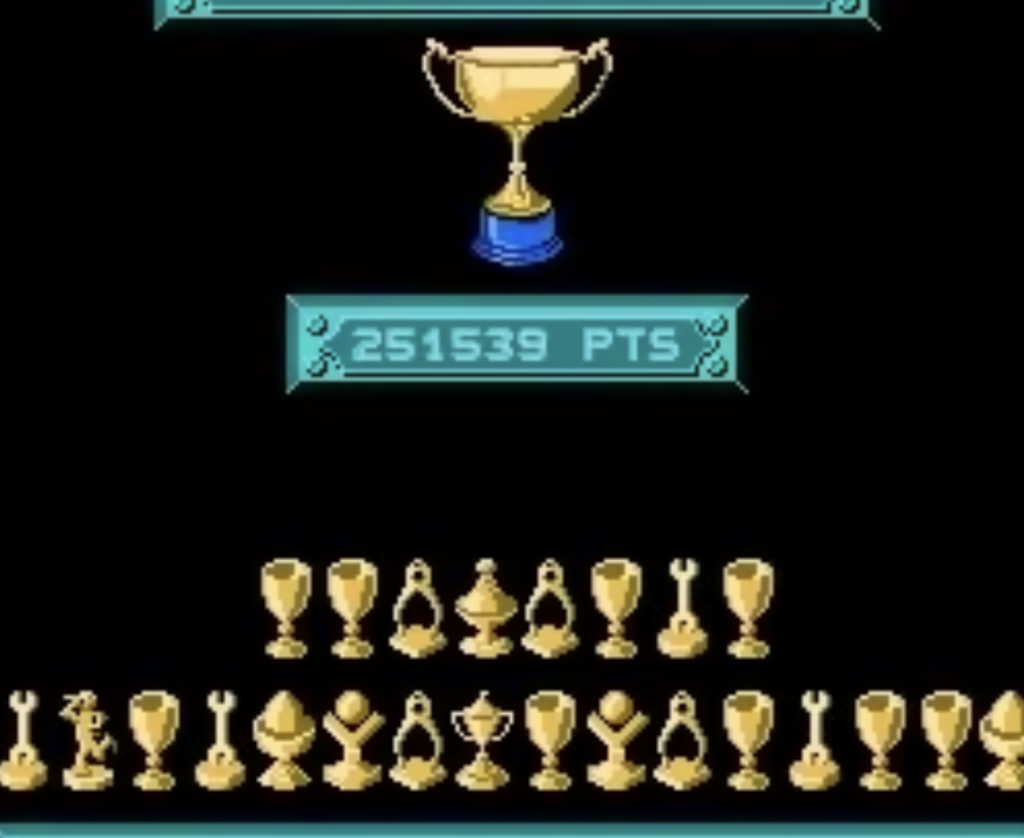